The major ‘cons’ of joining a tour group is you cant explore a city/country as much as you want, but the ‘pro’ is you can drop by to many countries and see a wee bit of it.

Take my last trip for example. i can have my breakfast in Amsterdam, Lunch in Brussels, and Dinner in Paris. sounds awesome, isnt it? But again you need to pay that ‘awesomeness’ with a long hour of bus ride. haha..

From Amsterdam to Paris, it took us about 7 hrs of bus ride in total, To make our back and butt a little less painful, we dropped by in Brussels for lunch and a little bit of city tour.

Brussels is the capital and the largest city of Belgium. I quite like this city, eventhough i just visited it for a few hrs only. haha. Most of the buildings is quite similar with Amsterdam, those 3-4 stories tall, but less colorful, more to classic white colours, i think? haha 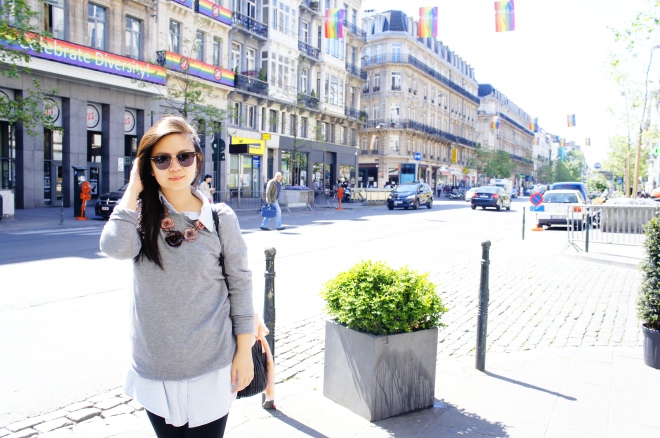 **took this picture in front of the chinese restaurant that we went to, guess we were in LGBT district? hmmpp**

And since Brussels is a home for international politics, there are so many buildings that looks like this. 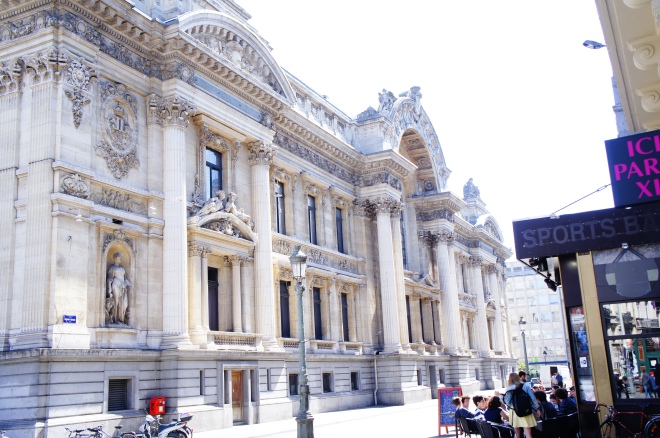 As we only have few hours in Brussels, we just dropped by to have some lunch in one horrible chinese restaurant.*i think its the least tasty and worst service restaurant in our whole trip* haha..  And after that, we walked around the city a bit and head our way to see the infamous..

A legendary statue in the corner of L’etuve road (Rue De L’etuve). **voto** I was really thinking that the statue will be much bigger than this. haha.. The size of this statue is only about 60-70cm, and made in bronze. My tour guide said, normally the locals will put some outfit on this pee-ing little man, like national clothes on national day, santa claus clothes on christmas, etc.

Since there’s no occasion when we came there, so its just a bare tiny statue. 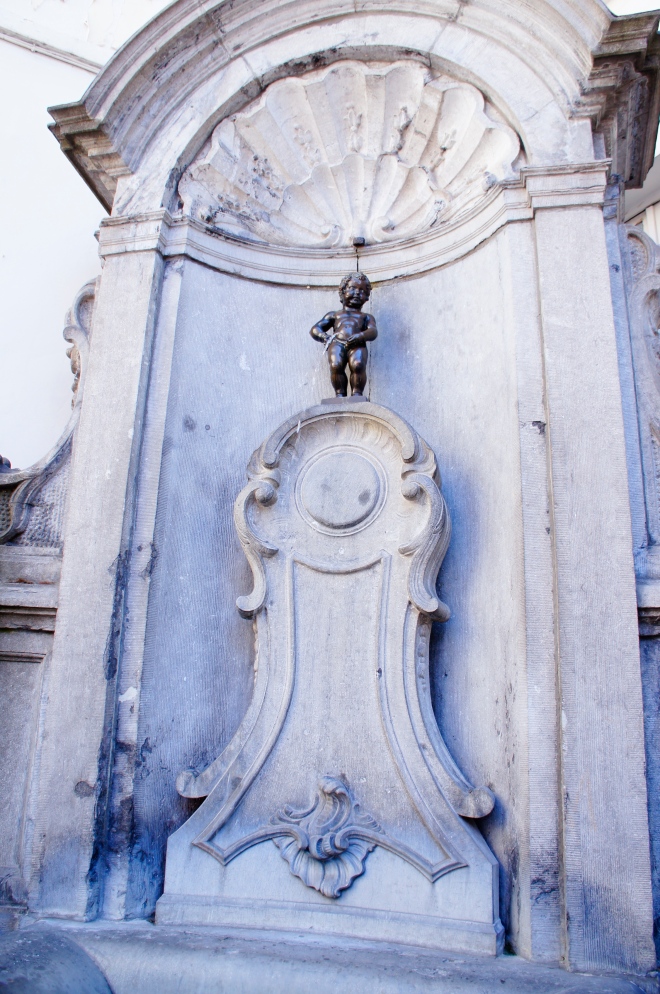 It may not look majestic to some of us. but the locals kind of treasure it so much, maybe because all the historical stories behind it. There are 2 famous stories behind this pee-ing boy.

Another story is, during some wars, this boy was pee-ing to a bomb that was about to explode. and fortunately the bomb never exploded. so it’s kind of remembrance to little brave boy. Dont know which story story is true.. but what we know now is, its a must see statue when you visit Brussels. haha.

I think there are so many delicious European chocolate. and many of it as well, already entered Asia’s market since i dont know when. But they said Belgian chocolate is different because They have been the biggest chocolate producers in the world. some of the finest chocolate like Godiva comes from Belgium too. Beside Manneken Pis statue, there’s one chocolate shop that’s always crowded with tourist. They claimed to handmade their own chocolates. so, we bought some home and give it to our relatives and friends, and all of them said it is sooo nicee..

Something that we could not miss! In Belgium, the treat it’s like the Waffles itself. Almost every corner of Mannaken Pis area selling Belgian Waffle & their Belgian chocolate..

it’s so hard to decide which one to go to. Me and my brother decided to go to 1 shop that is not to far from the Manneken Pis statue, a few people Q-ed for it, and we were like, ‘okay.. if there’s a Q, it might better than the others’. haha.. *Monkey See, Monkey Do situation* haha..

Initially we only bought 1 waffle topped with bananas and Belgian chocolate, but we find the chocolate to overpowering and cant stand the sweetness. so we decided to buy the plain waffles with sugar. and it tastes much better..! haha.. The waffle itself is already tasty, so i think much topping will ruin the waffle taste..

** she really enjoy posing at my brother’s camera.. i guess that what makes her put soooo much chocolate sauce until it overflows.. hahaha**

It’s the central square of Brussels, and it’s one of UNESCO World Heritage site. A must visit place for travellers! In previous time, they used this town-hall as a trading place, where they can buy and sell food and other things. even until today, they still use this place for restaurants and a place to hang out for the young and old. Another Unique Selling Point of this place, is their architecture. They have 3 different eras of architecture in 1 place (The Gothic, the Baroque and Louis XIV) 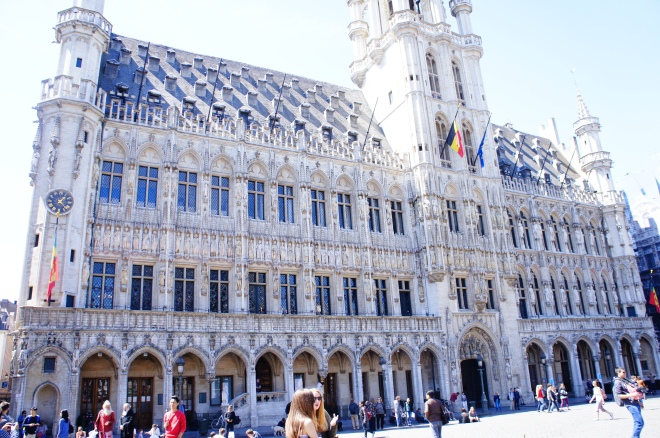 All pictures are taken with Sony Nex C-3, with no edit.